“We are ruined if we do not overrule the principles that the more we owe, the more prosperous we shall be”  – Thomas Jefferson

There is no more subversive entity in the US, more destructive, more inflammatory yet out of the spotlight of public outrage, than the Federal Reserve: it is the Fed’s actions over the past 108 years – and especially over the past decade – that have spawned much of the anger, resentment and hatred that has permeated US society to its very core as a result of the Fed’s monetary policies.

Yet because much of the public fails to grasp the insidious implications of endless money-printing which makes owners of assets exorbitantly rich at the expense of regular workers, popular anger at the Fed remains virtually non-existent, despite clear warnings from Thomas Jefferson, and countless others over the decades, about the dangers posed by central banking.

And so, taking advantage of the general public’s general gullibility, the Fed continues to lie and dissemble at every opportunity, of which the most recent example was last week when Powell said that “inequality has been with us for increasingly for four decades” and arguing that monetary policy is not a cause for that. What he forgot to mention is that four decades ago is when Nixon closed the gold window…

… severing the last link of the US dollar to tangible value, and allowing the Fed to print with impunity, creating the current wealth divide which has now spilled over into the streets of America.

One other thing the Fed has been consistently lying about is that it does not monetize the debt. The chart below is evidence that this, too, is a lie, with US Treasury debt increasing by $2.86 trillion in 2020 (most of it in the past three months) which is less than the $3.0 trillion increase in the Fed’s balance sheet over the same period. In other words, the Fed has monetized 105% of all Treasury issuance this year.

So although Powell may never admit it, Helicopter Money, also known as “MMT”, is now here, and will never go away as Deutsche Bank hinted earlier.

And speaking of MMT, below we republish the latest article from Adventures in Capitalism discussing how MMT is Going Mainstream – yes, even rap musicians endorse MMT now – and how this wanton printing of money to address every social ill will have profound ramifications that will last generations.

So without further ado, here is…

“MMT Going Mainstream…” by Kuppy of ‘Adventures in Capitalism’

My good friend Kevin Muir from Macro Tourist (I highly recommend that you subscribe) has been banging on about Modern Monetary Theory (MMT) for ages. I’ll admit, some of his pieces have been difficult to read as I’m firmly planted in the Austrian school—I believe gold is money and everything else is fiat. I believe governments create inefficiency and corruption while politicizing common sense ideas. I am against MMT in all of its insidious forms as it only legitimatizes all that I disagree with. With that out of the way, I’ve matured enough to know that what I think doesn’t matter. My job isn’t to stake the moral high ground; it is to make money for my hedge fund clients by noticing trends before others do. While I disagree strongly with MMT, Kevin has been right to repeatedly educate himself and his readers on MMT because it’s coming (whether or not you want it).

With Kevin’s permission, I have re-posted his most recent MMT note in full. I think this will be one of the most important macro pieces I’ll post on this site. There’s been a fundamental change in how governments tax and spend, yet most do not yet realize it. MMT is going mainstream. Are you ready…??? 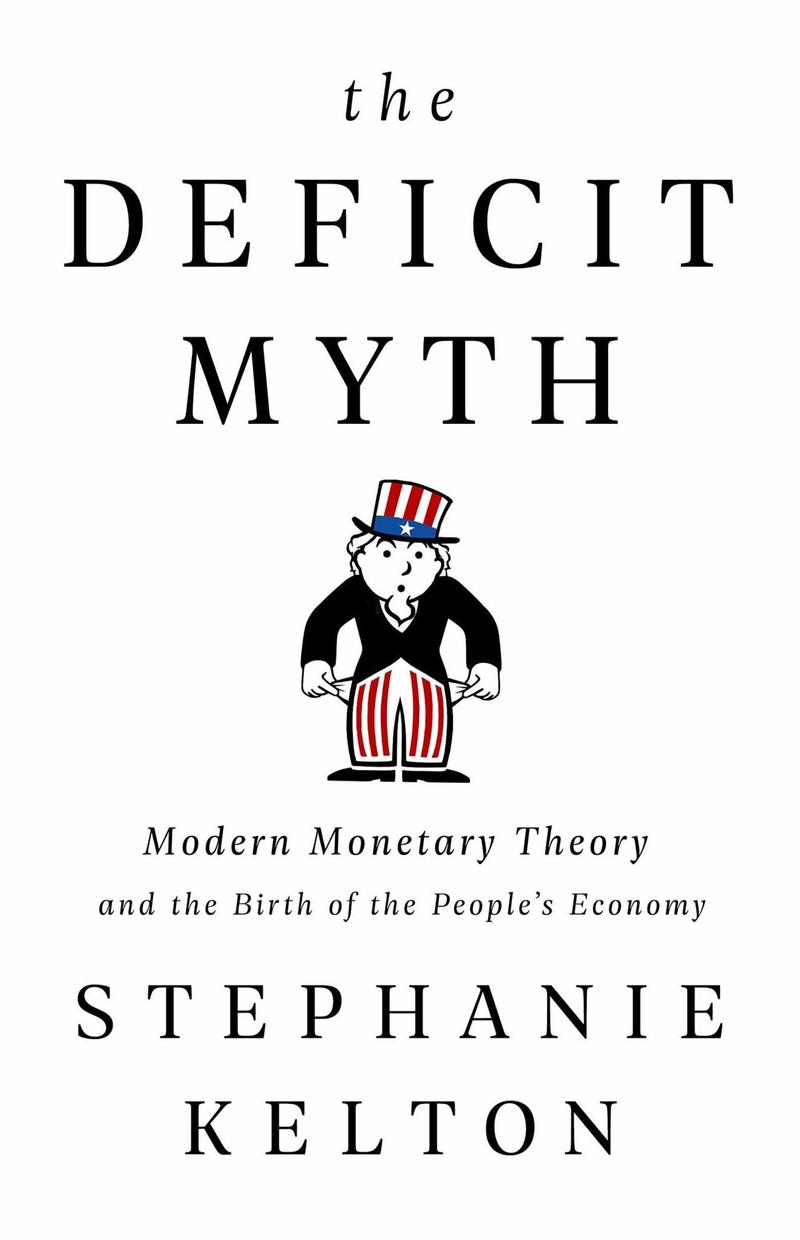 You might think MMT to be a crock. It might make every bone in your body shudder. You might feel sick to your stomach as you read the theory. These are just a few of the responses I have heard from traditionally trained hard-money types who learn about MMT.

I suspect most of you know that I am open-minded to many aspects of MMT, but expect it will be taken too far – just like monetarism has been taken too far.

When I see the extreme monetary policy of Europe and other countries with negative rates, all I can ask is how can anyone claim with a straight face that monetarism is working for us? So yeah, I would rather try something new than continue down the current road of easier and easier monetary policy.

Yet, what you or I think about a particular economic policy doesn’t mean squat. I am not here to debate what should be done, but what will be done.

So let’s put aside the economic merits of the different schools of thought, and focus on discounting their probable implementation.

I haven’t yet fully read Prof Kelton’s book, but glancing at the introduction, she does an admirable job sketching out her viewpoint in easy-to-understand layman’s terms. I have taken the liberty of pulling the important bits: 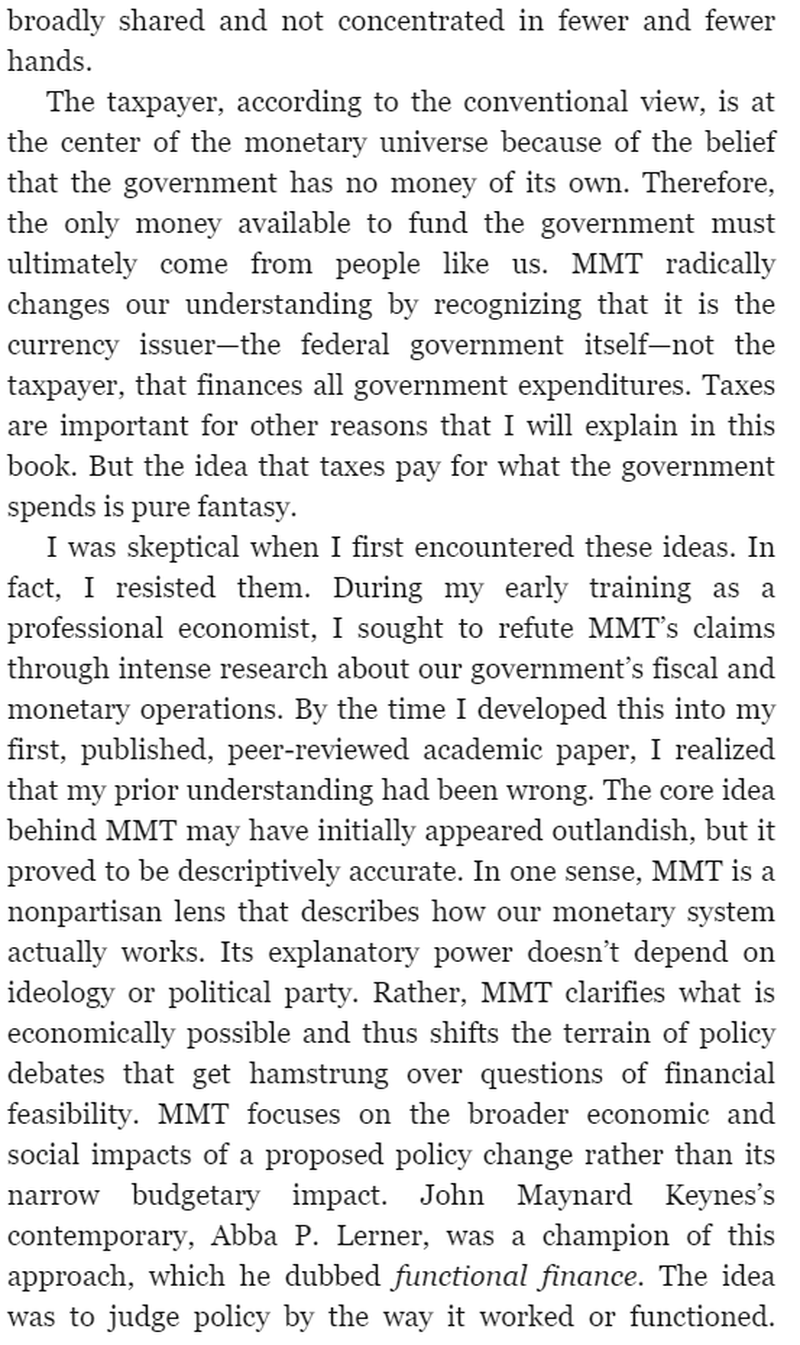 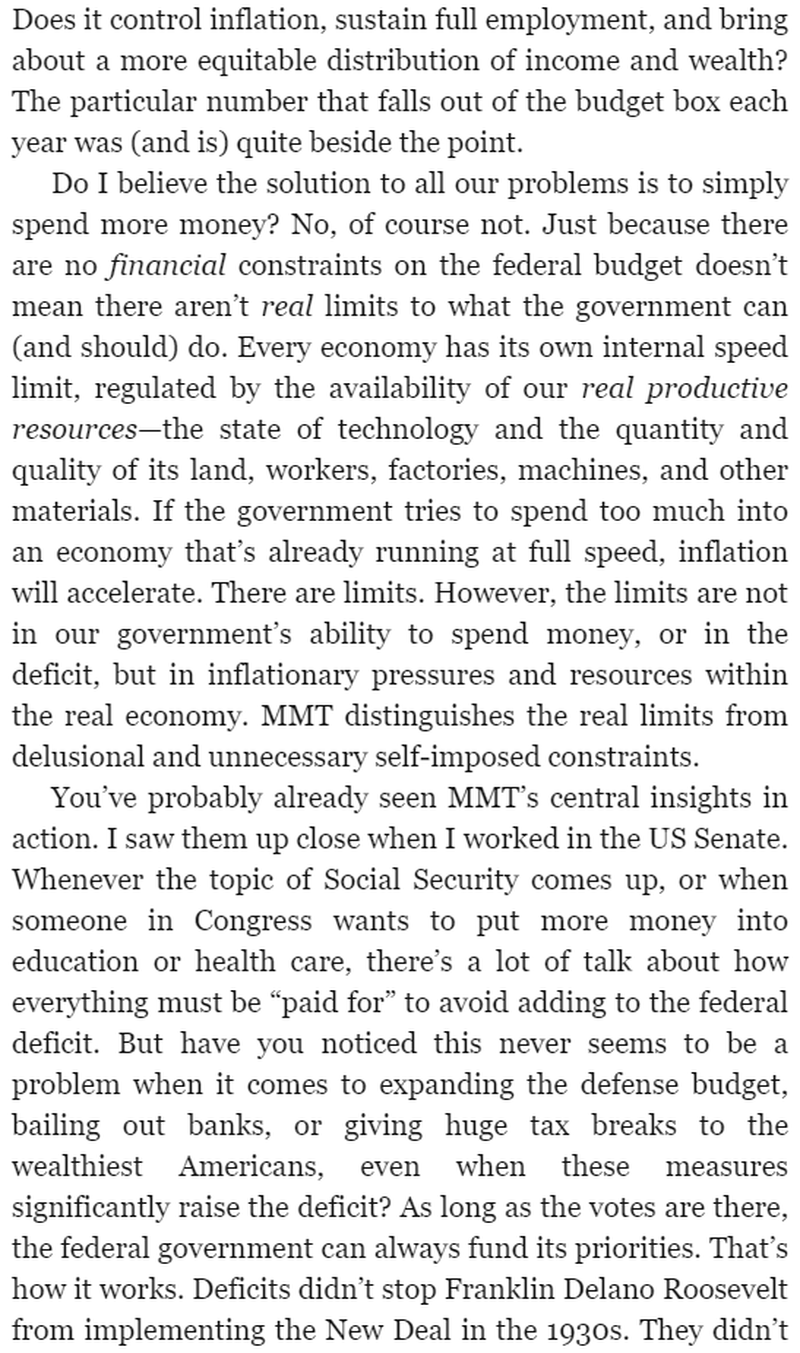 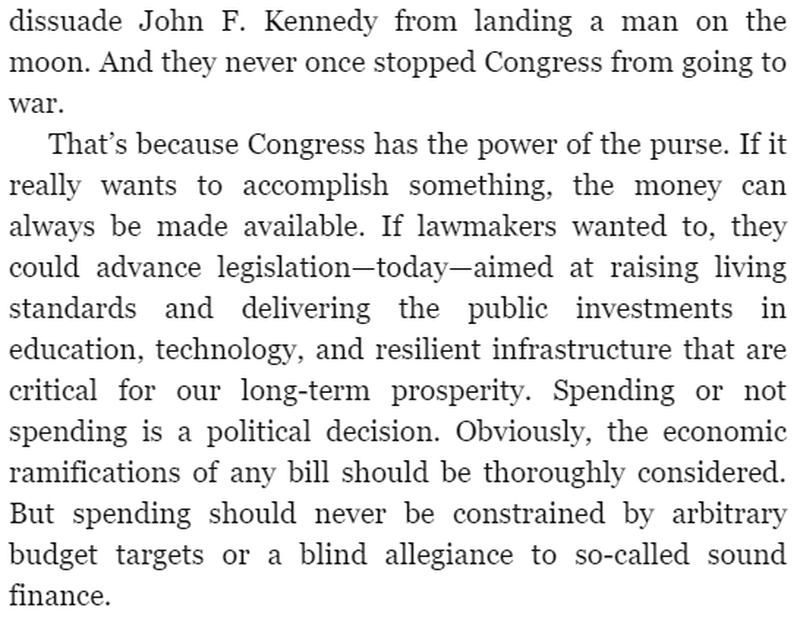 There is nothing new in Kelton’s introduction. MMT’ers have understood these concepts for more than a decade.

But we always must remind ourselves, as traders and investors, what’s important is to discount how the public perceives those ideas. Remember the whole Keynesian beauty contest concept (probably not the most politically correct analogy, but let’s remember that Keynes lived in a different era. In fact, I suspect if Keynes were alive today, he would be more politically correct than some of his most vocal opponents –Niall Ferguson apologizes for remarks).

Keynes rightfully understood that investors discount what the crowd will perceive as the most likely outcome as opposed to the best choice.

Which brings me to my main point. And I know some of you might think this is nuts. But I don’t care.

I have been watching for signs that the concept of “governments are not financially restrained” taking hold within the non-financial community.

I have even postulated that the corona virus crisis might prove to be the tipping point for this theory gaining traction. With all the extreme fiscal measures being put in place (without undue immediate negative effects), the public might realize that the government’s large fiscal response works miracles at staving off short-term economic pain. They might suddenly understand there is nothing holding society back from doing that again for other priorities.

Well, I think I got my signal. Earlier in the week, I noticed a popular rapper tweeting out the following: 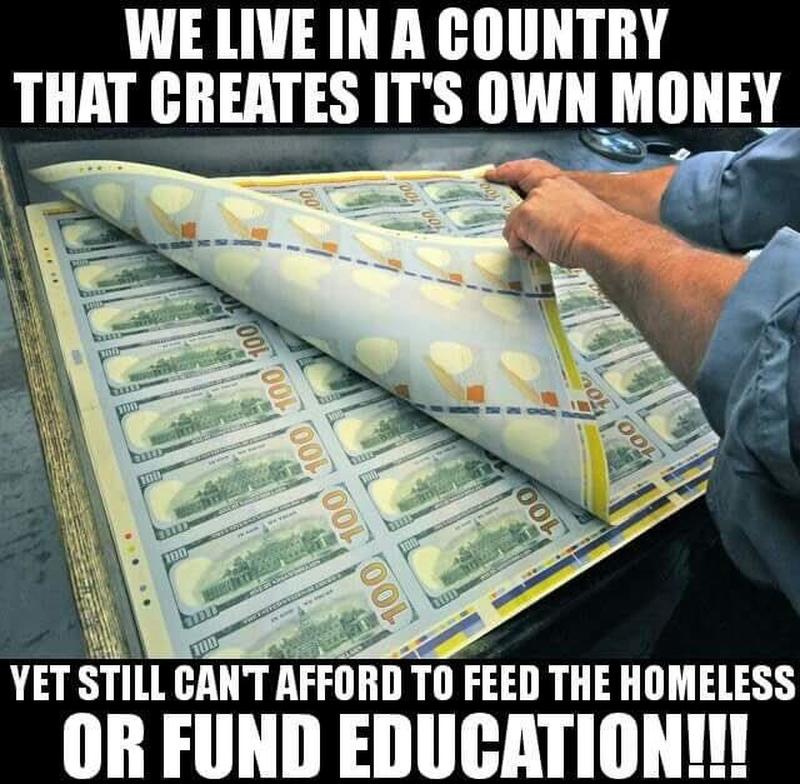 Yup. The whole theory behind MMT is being endorsed by rap musicians now!

When disputing the need for a balanced fiscal budget, MMT’ers have often resorted to the argument, “if there is always money for war, then why isn’t there always money for other social programs?”

I don’t want to dispute the validity of their argument. However, the narrative that “we need to balance budgets” has been torn down by the corona crisis better than the war argument ever did.

Over the last month, a growing portion of society has concluded that there was never any financial constraint to spending money.

I know the hard-money and traditionally-trained-economic thinkers will scream bloody murder at that thought. I get it. It doesn’t seem to make any sense. How can there be a free lunch? There is no such thing.

I will repeat again – I don’t want to discuss the merits of MMT. We will save that for another post.

What’s important – and it’s probably the most important thing that has ever happened in my investing career – is that the narrative surrounding deficit spending has changed.

Deficits are no longer “bad”. The budget hawks have all been silenced.

This will have ramifications that will last generations.

If this MMT school of thought continues to gain traction, then many of the investment playbooks from the last few decades need to be thrown out the window. It will be as a dramatic shift as the 1981-Paul-Volcker-stamping-out-of-inflation. It will be an end of an era.

Over the course of the coming months I will discuss the long-term investment consequences. But I wanted to highlight that MMT is about to go mainstream. And as it becomes more popular, it will turn investing as we know it on its head.

Decades from now we will look back at the corona crisis and say it changed more than just our attitudes about viruses, it marked the beginning of a change in the way we think about money.