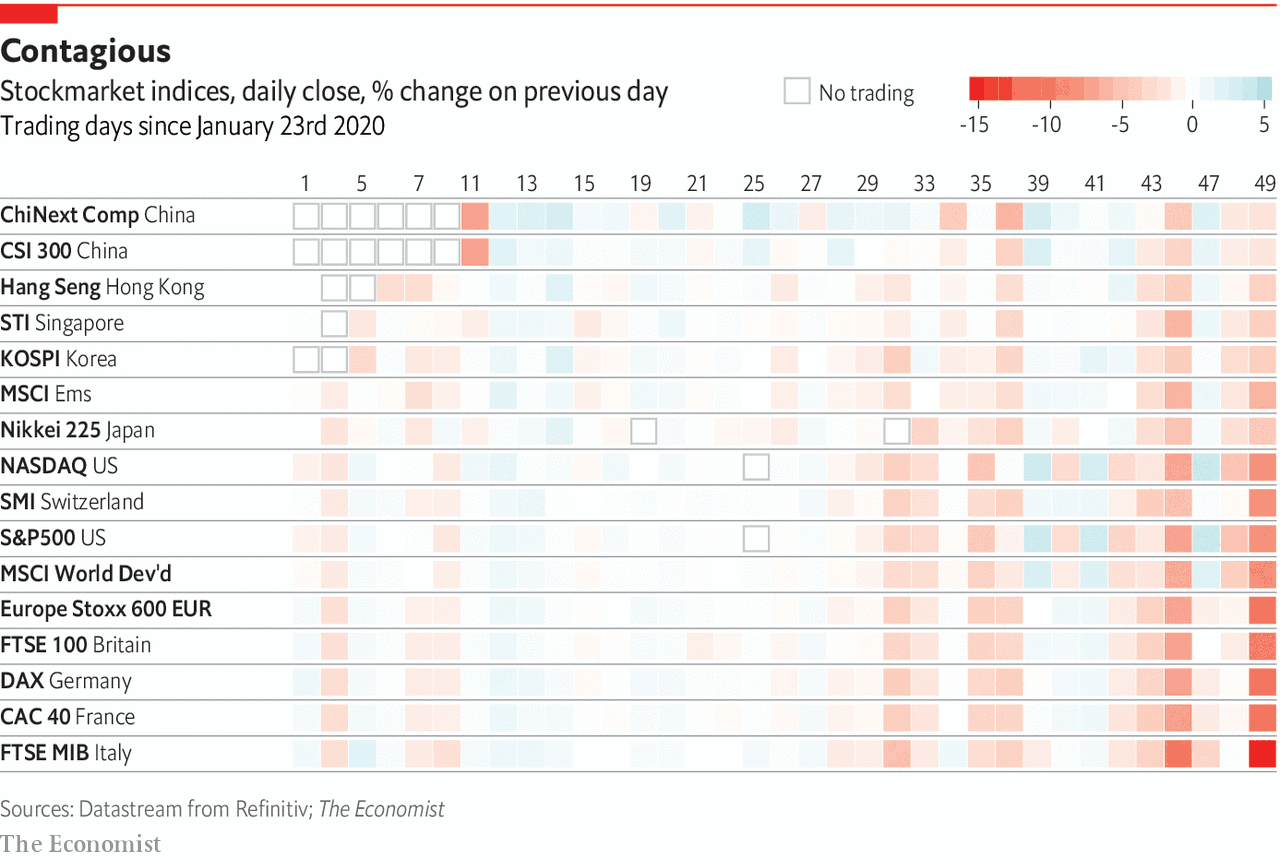 The Start of February seems an eternity ago. Then, almost all concern about the coronavirus outbreak was focused on China, home to more than 99% of confirmed infections. America had seven known cases and Italy just two. The epidemic had not even received its official name. Less than six weeks later, COVID-19, as the disease is now known, has become a global pandemic (for full coverage of the pandemic, see our coronavirus hub). Italy is under a country-wide quarantine. The virus is spreading rapidly in America. But China is gradually getting back to work, having wrestled its outbreak under control.

Financial markets have also been turned upside-down. In early February, China was the trouble spot, its equities among the world’s worst performers (their decline started after state media reported on January 20th that human-to-human transmission of the virus was possible).

American stocks were, almost daily, climbing to record highs. Their positions have since been reversed. Equities have cratered throughout much of the world. The American stockmarket’s bull run, its longest on record, has come to a shuddering halt. Instead, it is China that stands as the world’s best-performing market of 2020. Granted, the CSI 300 index, a benchmark of China’s biggest companies, is down by about 5% since the start of January. But that looks good when indexes around the world have plunged far more sharply. American stocks are still down by about 15% this year even allowing for the giant rally just before trading ended last week. ChiNext, a board for high-tech companies that is meant to be China’s answer to Nasdaq, is up by more than 10% this year. 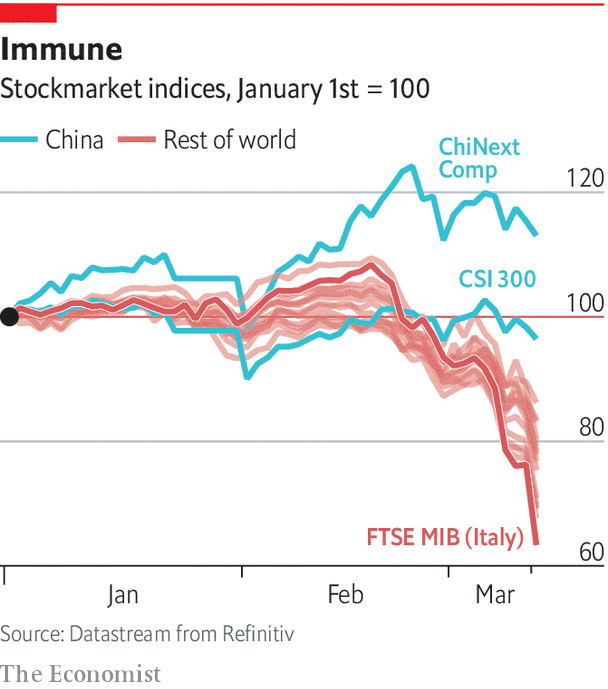 Is this out-performance justified? At the most basic level, it makes sense that China’s equities have fared better than those of other countries recently. Fears about the spread of COVID-19, and specifically about the economic damage that will result from the measures taken to slow it, have been the main reason for the collapse in share prices in America and Europe. In China, the trend is running in the other direction. Factories and restaurants have, in growing numbers, re-opened their doors. Investors in Chinese stocks know that the first few months of the year are basically a write-off, and have turned their minds to what comes next. Many expect the government to uncork a big stimulus to ensure a strong rebound.

Valuations in China are also, in investors’ jargon, much less demanding. The price-to-earnings ratio of the S&P 500 was 25 before the recent sell-off and is still about 18, strong by historical standards. China’s CSI 300, by contrast, has a price-to-earnings multiple of 14, having endured many long years in the desert. Whereas American shares have tripled in price over the past decade, Chinese shares are worth roughly the same as in 2010, not factoring in dividends.

All that said, there is good reason to wonder whether the resilience of China’s stock market can endure. Notably, Chinese bond yields have fallen steadily over the past two months and are near record lows. The implication is that investors in the credit market, usually a more sober group than their stock market counterparts, think economic growth will remain weak even as COVID-19 fades domestically. Troubles in the rest of the world will hit China in three ways. Its exports will suffer. Disrupted production in Germany and South Korea, among other countries, will ripple through its supply chains. And there is the very real threat that the virus might re-enter from abroad, despite China’s tight controls on travel. Pandemics do not respect borders, as should be painfully clear by now.