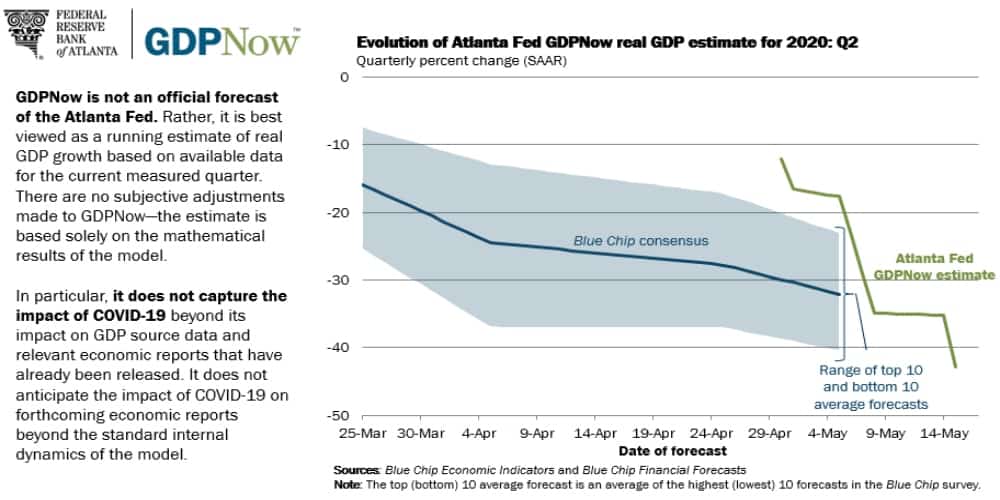 The growth rate of real gross domestic product (GDP) is a key indicator of economic activity, but the official estimate is released with a delay. Our GDPNow forecasting model provides a “nowcast” of the official estimate prior to its release by estimating GDP growth using a methodology similar to the one used by the U.S. Bureau of Economic Analysis.

GDPNow is not an official forecast of the Atlanta Fed. Rather, it is best viewed as a running estimate of real GDP growth based on available data for the current measured quarter. There are no subjective adjustments made to GDPNow—the estimate is based solely on the mathematical results of the model. In particular, it does not capture the impact of COVID-19 beyond its impact on GDP source data and relevant economic reports that have already been released. It does not anticipate the impact of COVID-19 on forthcoming economic reports beyond the standard internal dynamics of the model.

The GDPNow model estimate for real GDP growth (seasonally adjusted annual rate) in the second quarter of 2020 is -42.8 percent on May 15, down from -34.9 percent on May 8. After this week’s data releases from the U.S. Department of the Treasury’s Bureau of the Fiscal Service, the U.S. Bureau of Labor Statistics, the Federal Reserve Board of Governors, and the U.S. Census Bureau, the nowcasts of second-quarter real personal consumption expenditures growth and real gross private domestic investment growth decreased from -33.9 percent and -62.8 percent, respectively, to -43.6 percent and -69.4 percent, respectively.